The Japanese Covered Bridge or Cau Chua Pagoda (in Vietnamese “Cau Nhat Ban”) is one of the most famous tourist attractions in Hoi An, Vietnam.

Location: The Hoi An Japanese Bridge crosses a small canal on the west end of the Old Town, connecting Nguyen Thi Minh Khai Street to Tran Phu Street - the main thoroughfare along the river. Art galleries and cafes line both sides of the peaceful street beyond.

Remarks: There are no restrictions with regards to dress code and the bridge is always open. Although anyone can photograph the bridge, crossing the Hoi An Japanese Bridge requires a coupon included in the entry fee ($4.50) for Hoi An's Old Town attractions. A lack of coupon isn't always a problem for crossing the bridge; tickets are rarely checked.

The original Vietnamese name of this bridge is “Lai Vien Kieu”. It is considered that the Japanese Covered Bridge belongs to the Japanese community in Hoi An, and was built in the early seventeenth century. No trip to Hoi An would be completely without visiting Japanese Covered bridge. The Japanese Covered Bridge in Hoi An is a beautiful example of the Japanese architecture of the period. The bridge was constructed with a roof so that it could be used as a shelter from both rain and sun. At one end of the bridge, there are 2 sculptures – of a dog and of a monkey. These two animals are symbols of sacredness in Japanese culture. Another reason behind these animal sculptures is that according to the Asian zodiac signs, in the year of the monkey and the year of the dog many of the Japanese Emperors were born. Records also say that the construction of the bridge was initiated in the dog year and was finished in the monkey year

Inside the Japanese Covered Bridge lies a temple of the northern God Tran Vo Bac De. This God is considered the God of Weather. People believe that He controls all kinds of weather changes and natural calamities, so the sailors both worship and fear Him. Another theory is the bridge is built to subdue a world-spanning ‘mamazu’ dragon monster, whose head was in India and tail in Japan. The tail was said to cause earthquakes in Japan. Vietnam is located in the area of the mamazu’s back so the bridge was built to pin the mamazu down preventing earthquakes.

The Japanese bridge has undergone relatively few modifications over the centuries. The French removed thresholds and leveled the road across the bridge to support motorized vehicles during their colonization. The changes were later undone and the bridge pedestrianized again during major restoration in 1986.

Although anyone can photograph the bridge, crossing the Hoi An Japanese Bridge requires a coupon included in the entry fee ($4.50) for Hoi An's Old Town attractions. A lack of coupon isn't always a problem for crossing the bridge; tickets are rarely checked.

Old Houses in Hoi An

Cua Dai Beach in Hoi An

Fujian Assembly Hall in Hoi An 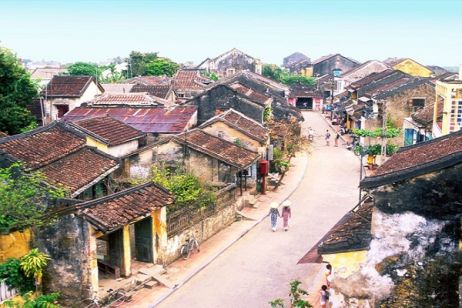 Hoi An Museum of History & Culture